For thousands of years, organic food was the only option Now, with herbicides, pesticides, fungicides, and genetically-modified foods, organic is still the best option. Here are 13 reasons to eat organic food: 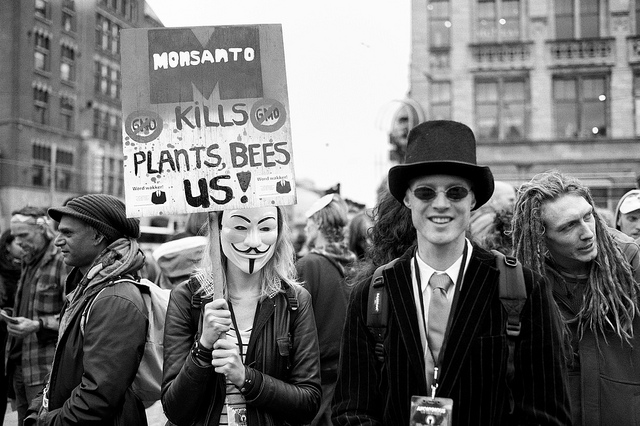 2. More and more research is coming in about the health threat of genetically-modified food. The results range from intestinal damage, allergies, liver or pancreatic problems, testicular cellular changes, tumors, and even death in the experimental animals. For more information, read the excellent books by Jeffrey M. Smith Seeds of Deception and Genetic Roulette. I’ll discuss more of the problems linked with GMOs in upcoming blogs. Eating third-party certified organic foods or those that are guaranteed to be grown from organic seed helps protect you from the health consequences of GMOs.

3. Fruits and vegetables are real food, not pesticide factories. Eighteen percent of all genetically-modified seeds (and therefore foods that grow from them) are engineered to produce their own pesticides. Research shows that these seeds continue producing pesticides inside your body once you’ve eaten the food grown from them! Foods that are actually pesticide factories…no thanks.

4. They’re free of neurotoxins—toxins that are damaging to brain and nerve cells. A commonly-used class of pesticides called organophosphates was originally developed as a toxic nerve agent during World War I. When there was no longer a need for them in warfare, industry adapted them to kill pests on foods. Many pesticides are still considered neurotoxins. Learn more about pesticides in The 4-Week Ultimate Body Detox Plan.

5. They’re supportive of growing children’s brains and bodies. Children’s growing brains and bodies are far more susceptible to toxins than adults. Choosing organic helps feed their bodies without the exposure to pesticides and genetically-modified organisms, both of which have a relatively short history of use (and therefore safety).

6. In study after study, research from independent organizations consistently shows organic food is higher in nutrients than traditional foods. Research shows that organic produce is higher in vitamin C, antioxidants, and the minerals calcium, iron, chromium, and magnesium. (For more information, check out The Life Force Diet).

Keep reading to learn how organic food is better for the environment…
7. The US Environmental Protection Agency (EPA) estimates that pesticides pollute the primary drinking source for half the American population. Organic farming is the best solution to the problem. Buying organic helps reduce pollution in our drinking water.

8. Organic food is earth-supportive (when big business keeps their hands out of it). Organic food production has been around for thousands of years and is the sustainable choice for the future. Compare that to modern agricultural practices that are destructive of the environment through widespread use of herbicides, pesticides, fungicides, and fertilizers and have resulted in drastic environmental damage in many parts of the world.

10. Most organic food simply tastes better than the pesticide-grown counterparts.

12. Organic farms are safer for farm workers. Research at the Harvard School of Public Health found a 70% increase in Parkinson’s disease among people exposed to pesticides. Choosing organic foods means that more people will be able to work on farms without incurring the higher potential health risk of Parkinson’s or other illnesses.

13. Organic food supports wildlife habitats. Even with commonly used amounts of pesticides, wildlife is being harmed by exposure to pesticides.

14. Eating organic may reduce your cancer risk. The US Environmental Protection Agency (EPA) considers 60% of herbicides, 90% of fungicides, and 30% of insecticides potentially cancer-causing. It is reasonable to think that the rapidly increasing rates of cancer are at least partly linked to the use of these carcinogenic pesticides.

15. Choosing organic meat lessens your exposure to antibiotics, synthetic hormones, and drugs that find their way into the animals and ultimately into you.

16. Organic food is tried and tested. By some estimates genetically-modified food makes up 80% of the average person’s food consumption. Genetic modification of food is still experimental. Avoid being part of this wide scale and uncontrolled experiment.

17. Organic food supports greater biodiversity. Diversity is fundamental to life on this planet. Genetically-modified and non-organic food is focused on high yield monoculture and is destroying biodiversity.